Why is Nathaniel Pitoniak the Best Criminal Lawyer in Houston for your case? 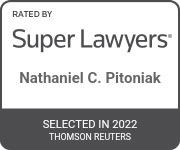 Former Prosecutor Fighting For Your Rights

Nathaniel Pitoniak is a former Felony Prosecutor and Chief Prosecutor with the Harris County District Attorney’s Office in his fifteenth year of practice. He has represented people from many different backgrounds including working class people, veterans, and professionals such as doctors, business people, dentist, and pharmacists. He frequently represents non-citizens facing potential immigration consequences. His philosophy on the aggressive and effective defense of people accused by the police of breaking the law is to “speak softly, and carry a big stick.” See what Nathaniel’s former clients have to say about him in their reviews on Google.

In addition to being a top-rated criminal lawyer, Nathaniel Pitoniak is the father of two daughters.  He also serves on the Gifted and Talented Parent Advisory Committee.

Working Hard For Your Criminal Defense

Through hard work and preparation, combined with his experience of how the prosecutor’s office works, Nathaniel can sometimes obtain dismissals, favorable reductions to lesser offenses, or pre-trial diversions without the necessity of trial. Nathaniel does not show up to court screaming at prosecutors as some grandstanding lawyers might, and remains mindful that you can catch more flies with honey than vinegar.

However, Nathaniel handles every case from the beginning with the ultimate goal of trying the case. Rather than rely on the mercy of the prosecutors, in many cases a favorable result can only be achieved after the prosecutors become worried that they might lose at trial, a worry that only develops once they realize you are serious about trying your case.

People accused of crimes often wonder what their lawyer is doing to help their case in the afternoons and evenings after morning docket. Prior preparation prevents poor performance, and Nathaniel puts in extensive work behind the scenes researching and collecting evidence. If push comes to shove, Nathaniel has extensive jury trial experience with both felony and Misdemeanor offenses which enables him to tell your side of the story in a manner calculated to persuade the jury. He is a fierce advocate who has tried tough cases and achieved great results. He loves to try cases. Nathaniel Pitoniak received a Not Guilty verdict on a serious felony offense where the punishment range was from 25 years to life in prison.

Find the Best Criminal Defense Attorney Near You

Many people search for the “best criminal defense attorney near me” and hire one of the first lawyers that come up on Google without doing much more research. While having your attorney nearby is important, it’s also important to know that you’re hiring the right attorney for your case.

Nathaniel attended the University of Texas at Austin, the most competitive public school in Texas, and graduated with honors in three years. Nathaniel received his law degree from the most competitive law school in Houston, the University of Houston Law Center. After receiving an “A” in Criminal Law, Nathaniel was eager to obtain real world experience and so interned with the Harris County District Attorney’s Office. Here, Nathaniel fell in love with Criminal Law and was hired to work as a prosecutor. Nathaniel gained valuable experience persuading juries in trials of felony and misdemeanor offenses of all types. After leaving the office, Nathaniel worked for some large law firms handling multi-million dollar disputes before returning to his true passion of defending people accused of crimes.

Nathaniel’s prior experience gave him an insight into the operations of the prosecutor’s office, in addition to valuable jury trial experience many criminal defense lawyers lack. His clients benefit from his ability to effectively collect and present evidence to tell his clients’ side of the story with the goal of dismissal or acquittal in every case. While a plea bargain is sometimes in his clients’ best interest, Nathaniel works for his clients and advises them of their options before recommending this course. Nathaniel cares deeply for his clients and fights for them instead of shuffling them through the system as some lawyers do. Nathaniel handles all white collar crime cases, including credit card fraud, money laundering, and embezzlement.

Read our case results and see why Nathaniel Pitoniak is a top-rated criminal lawyer in Houston.

“Nathaniel went above and beyond for me. He kept me updated with all details throughout the process. In such a high-stress situation, he kept me at ease and hopeful. He worked diligently to get my case dismissed. I would refer him to anyone in need.“